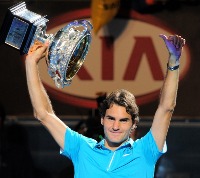 Трябва да се отбележи, че Роджър се е срещал лично с принц Уилям след мача:
Q. Were you warned beforehand that there may have been a Royal visitor tonight during the match?

ROGER FEDERER: Yes, I was warned.


Q. Did you expect the reaction that came with the flashes and the cheering and stuff like that?

ROGER FEDERER: For him when he walked on?

ROGER FEDERER: Of course. I think I've had situations where someone walked in and there was big round of applause. I'm used to it because I play a lot of primetime matches where there are very important people watching.

This one tonight was obviously extremely special. It's a pleasure, of course, playing in front of him.


Q. What would be the most intimidating person that's come to watch a match of yours?

ROGER FEDERER: Well, used to be my friends and parents early on. Then it goes other athletes, actors and musicians, Royal Highness. Just moves on. So I've had plenty. Obviously depends on the situation. Obviously having legends of the game watching, for me, is very nice always.

But then, of course, where he comes from, you know, he knows tennis, and Wimbledon's big, you know. So for me it was very ‑‑ I mean, a big honor that he came to watch me.


Q. Will you get a chance to chat more informally to William later, maybe see him later tonight?

ROGER FEDERER: I saw him briefly just before the press conference. Got a little chance to talk.

ROGER FEDERER: What did he say?

ROGER FEDERER: He was happy he could make it. Yeah, I mean, I'm not gonna tell you everything he just said to me. You've got to have a little bit of a secret.

No, he looked really happy coming to a sports venue. I think he's had a very busy schedule the last few days. He shook a lot of hands, and I knew mine was one more. From what I've heard, I think he met Serena and myself, and came to watch my match.

He said he was happy that I played a little bit longer, because the match could have ended even shorter. Yeah, so it was nice.